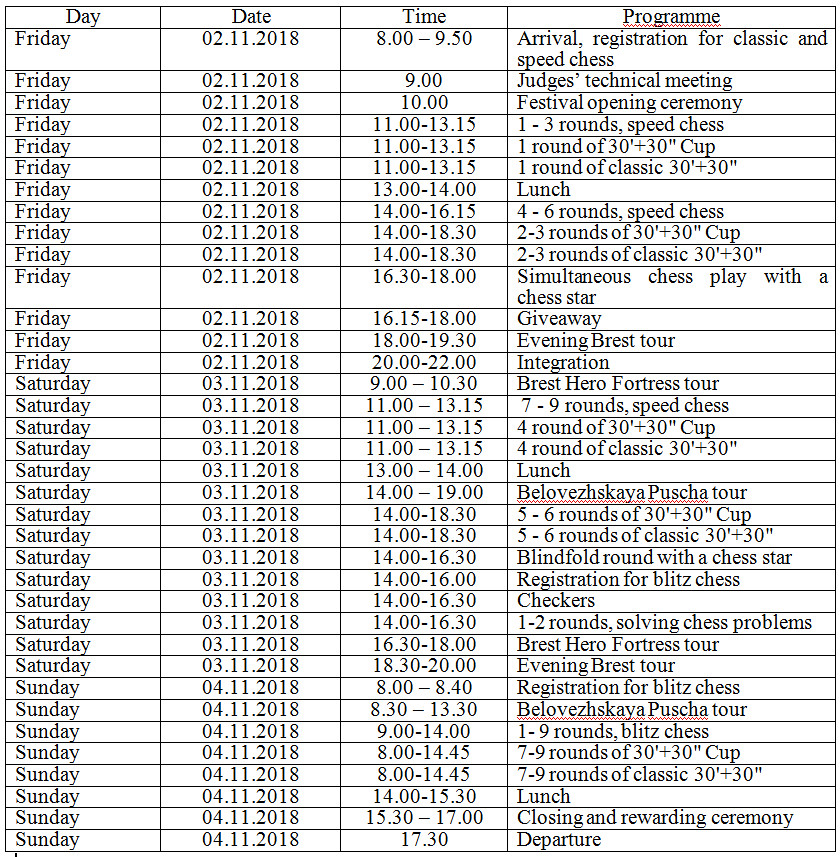 Between tours various master classes, games and activities are provided.
Organizers provide drinks and an entertainment for participants in a game zone during the tours.

General management and the organization of competitions are carried out by:

Direct management of the Festival is carried out by:

Direct management of the Cup is carried out by:

Competitions are held according to the existing Rules of FIDE, this Regulation and Standing Orders.

The participant has the right to appeal against the decision of the judge at the Chief judge. The decisions made by the Chief judge of competitions are final.
Organizers reserve the right to make reasonable changes to this Regulation and other conditions of reception. Final interpretation of this regulation remains for organizers.
THIS REGUATION IS THE OFFICIAL INVITATION TO COMPETITIONS.

Official page of the Festival and the Cup: http://shkap.by/blackpawn

Players from Belarus and the countries of the FSU and beyond are invited for participation. All people, except players, have to be classified as accompanying persons. Access to a game and entertaining zone is allowed only to the persons accredited by organizers.
The festival is inclusive, we provide barrier-free environment for people with disabilities, special chessboards for the blind and visually impaired, sign language translation for the deaf (hearing-impaired).

Two open tournaments on classic chess with rating calculation by FIDE:
tournament H — for the players with no restriction of age having ID number of FIDE and rating on classic chess. Players without the rating of FIDE are also allowed in coordination with organizers;
tournament K (Cup) — with a personal-command offset for the players of 2006 year of birth and younger, having ID number of FIDE. Teams are formed of 2 people: a boy and a girl representing one chess federation. The number of teams from one federation isn’t limited.

Three winners are defined in each tournament among men (boys) and women (girls). In tournaments with the number of players of more than a hundred the quantity of prizes increases to two and more. In the Cup three victorious teams are also established.
Winners in each tournament are awarded with valuable prizes (for the first places — according to the table), with cups, medals and diplomas, prize-winners – with valuable prizes and diplomas. Special prizes and diplomas are set for the oldest and youngest participants of the Festival, in tournaments on speed chess and blitz for the best players 2012, 2010, 2008 years of birth, veterans (players of 1958 year of birth and older), players with disability, in a tournament N on classical chess are also established to the best players with rating <2000 and without rating and also special prizes from the General partner and PUE Knizhny Shkap. Awards will take be given at the closing ceremony.

In case two and more participants have scored identical quantity of points final places are distributed taking into account the following additional indicators in decreasing order:
1. The truncated coefficient of Bukhgolts-1.
2. Buchholz’s coefficient.
3. Berger’s coefficient.
4. Blitz on FIDE rules will be used only when determining prize-winning places. In case there are two participants with identical additional indicators one party or a tournament on circular system is played if there are more than two such players. Color and starting number (if necessary) are determined by lot. Blitz Armageddon (sudden death), white figures receive 5 minutes, black — 4 minutes, in case of a draw the player with black figures wins.
In the Cup command places are determined by sum of points, gained by all participants of the team. At equality of points between teams the following additional indicators are considered:
1. Sum of places of members of the team.
2. The best result.

Deadline to apply – October 12, 2018.
It is necessary for registration:
1. To download and fill in the Registration Form (Word document)
2. To confirm the payment fact if not paid online (to make a photo or the scan of the receipt of payment)
3. To send the filled Registration form and payment confirmation to e-mail: blackpawnby@gmail.com
Applications from organized groups are accepted till September 30, 2018. A discount for payment of tournament contributions for groups of more than 20 people – 10%, more than 30 people – 20%. Late registration is possible on condition of coordination with organizers.

“Inturist” hotel: http://www.brestintourist.by/
“Junost” hotel: http://junosthotel.by/
“Akvatel” hotel: http://brest-dvvs.by
A camp site of Public educational institution «Brest regional centre of tourism and local studies for children and youth»:http://bresttur.by
http://corfootball.by
http://www.rowingbrest.by
Organizers of a festival provide discounts on accommodation in official hotels of the Festival, excursions and meals at the venue of the Festival. The prices of accommodation, excursions and meals are specified in the Registration form.

Registration fees, accommodation in official hotels of the Festival, excursions and meals can be payed online and without the commissions HERE

The Registration fees have to be transferred into the account of the Private unitary enterprise for rendering services «Knizhny Shkap» UNP 291342138, Republic of Belarus, Brest, Dzerzhinsky St., 63, 224030 in bank not later than October 12, 2018.
• Bank details (for payments in euro for foreign participants): BY55BELB30121506050520226000, JSC Bank of BELVEB code BELBBY2X
Correspondent banks: https://www.belveb.by/about/correspondent-banks/bank-broad/

In case of cashless form of payment all expenses for commission payments are incurred by the sender. Please, specify a surname of the player for whom the payment is made, and write in purpose of payment: «Payment for participation in the Black Pawn Festival». Payment for all types of tournaments, accommodation in official hotels of the Festival, excursions and meals, transfer and also participation in creative competitions is made by UNIFIED PAYMENT. The surname of the group leader is specified in group payments by unified payment.
The refusal of participation received later than one week prior the event, doesn’t provide a refund, in other cases – to the discretion of organizers. Replacement of the participant can be made for group applications not later than 24 hours prior the event. Please, inform us about these changes in writing on e-mail: blackpawnby@gmail.com.

Citizens of 77 countries can arrive to the tourist and recreational zone «Brest» without visas for a period of up to 10 days. The following documents are necessary: the passport, the health insurance, the migration card (given out at arrival), the document granting to foreign citizens the right for individual (group) visit of the tourist and recreational zone «Brest» which can be got in GUO «Brest Regional Center of Tourism and Local Studies of Children and Youth»: http://bresttur.by by provided that you live in official hotels of the Festival.
During the Festival medical care will be provided according to tournament provisions of FIDE.

Expenses connected with the organization of the Festival, an informative-entertainment program, refereeing and rewarding holding the opening and closing ceremonies are born by Organizers.
The expenses connected with trip, meals and accommodation of participants and accompanying persons are born by the sending organizations or participants personally.

Coaches, who send applications from organized groups, participate in a separate competition. Three coaches who have gained the greatest number of points are awarded with diplomas, medals and valuable prizes. The coach receives one point for each participant of A-H tournaments and also points for final places in these tournaments of chess players according to the table:

A creative competition is held in three age groups: up to 7 years old; 8-11 years old; 12 years old and the oldest.

Summing up the results of Creative competition and rewarding of the winners with valuable prizes and diplomas will take place on November 4, 2018 at a ceremony of closing of the Festival in the Track and field athletics arena on Moskovskaya St., 151 at 15:30.

During the Festival independent public voting for the best work in the Drawing nomination will take place. The author of the work which gets the maximum number of votes will win a prize of spectator sympathies.

All works of winners will be published on the official page of the Festival, and also in official groups in social nets.

Necessary information can be obtained on the official page of the Festival, and also in official groups in social nets: